Every year, we look forward to the return of the sea lion sightings off of our decks.  They have impeccable timing, showing up year-after-year in front of our floating homes around mid-December.  They aren’t just vying for the best spot to watch the Christmas Ships.  The reason they show up so predictably is because they are following the salmon runs.  When you see the sea lions, you can be sure the salmon have begun their run.

The 2019 Salmon Fishing Seasons for Humans are as follows (always double check the Oregon Sport Fishing Regulations for changes and updates to the seasons):

All About our Sea Lions

The first sea lion sighting for us this season happened on December 17th on the Multnomah Channel.

The sea lions that swim and dive past our floating houses are likely California sea lions.  They grow to up to 8.5 feet long and up to 1,200 pounds. But there are also a smaller number of Steller Sea Lions which make it all the way to the Bonneville Dam.  Steller sea lions are larger and lighter in color than the California Sea Lions – growing up to 11 feet and weighing up to 2,500 lbs. 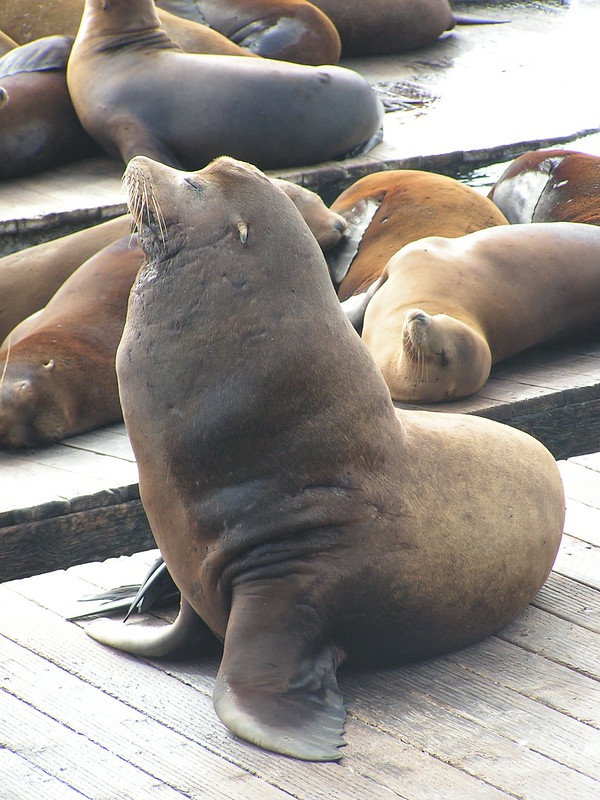 The sea lion population is growing and they tend to congregate in Astoria at the east mooring basin and near fish processing plants and travel up the Columbia to the Multnomah Channel all the way to the mouth of the Willamette River to the Columia River and many find great salmon to hunt at the Bonneville Dam. In the Willamette River, small numbers are found as far inland as Willamette Falls in Oregon City.  So it’s no wonder floating home owners see them when the salmon are running.

Some angler groups are concerned with the sea lions eating too many salmonids and would like to reduce the population of sea lions. Both the Steller and the California sea lions are protected under the wide-ranging 1972 Marine Mammals Protection Act, making it illegal to harass, feed, hunt, capture, collect, or kill them.  In addition, the Steller sea lion is listed as a Threatened Species under the Endangered Species Act.

If you see a sea lion, do not get near it nor try to interact with it in any way.  Not only is it illegal to interfere with them, they have been known to pull people from their docks and yank people from their fishing boats in the Willamette River near the head of the Multnomah Channel.  Given that you could find yourself in a tug of war game with a 1,200 lb California sea lion in waters which are 40 degrees, it is best to keep a safe distance when you spot one.

To report a dead, injured or stranded marine mammal, or for law enforcement related to marine mammals such as harassments and other violations,please call the Oregon State Marine Patrol: 800-442-0776

Send us an email and let us know about your sea lion tales.

Get the latest Floating Home News emailed directly to you